9 Deathloop tips to make sure you survive the day (again) 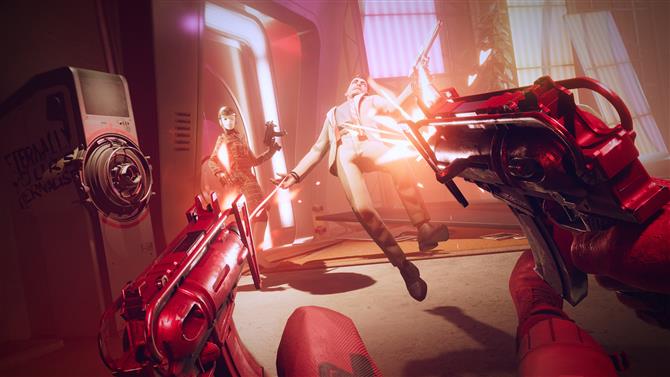 Some Deathloop tips will always help when you’ve got eight people to kill in a day. Eight Visionaries to find in a time looping 24 hours that will repeat forever until you kill them all in one go and break the cycle. The various powers and weapons you can get can be found in almost any order to obtain and learn, there are lots of different weapons to master, and loads of routines and schedules to learn. There’s basically a lot to unravel and it can feel especially overwhelming right at the start. However, as you progress and learn more it does get easier and these tips will only help with that process. Understanding where prioritize your investigations, or what abilities and weapons to get at the start can really really make a difference. These Deathloop tips will help with all of that and help you end forever, faster.

1. Follow the story until you get Residium and can save items 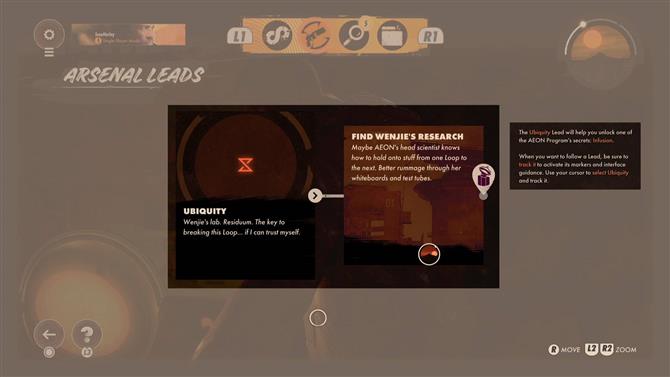 It’s tempting to rush off and explore the first chance you get, but until you unlock Residium you won’t be able to save any guns or items you find – every time the day loops you’ll lose everything. Follow the story prompts until you reach a character called Wenjie. This will lead you to harnessing the power of Residium to ‘infuse’ any weapons, powers and buffing Trinkets you find so that they loop around with you. Once you can do that you can start to build an arsenal of gear to help you take down the Visionaries.

2. Focus on Arsenal Leads first to get more gear 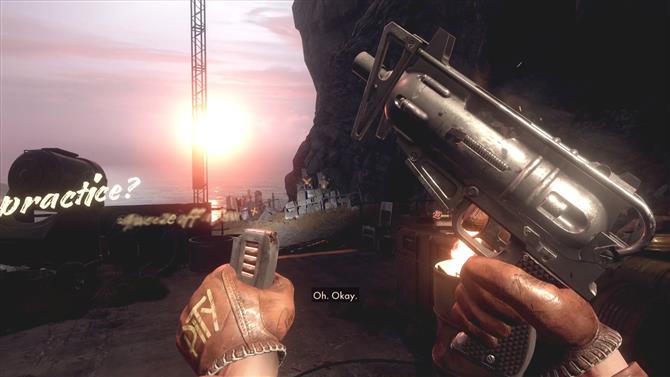 You have two sets of ‘leads’ you can follow. Visionary Leads will help you trackdown the people you need to kill – specifically where, and more importantly, when, you can find them. However, focus on the Arsenal Leads first which will lead towards weapons and abilities. This will include meeting most of the Visionaries as they each have a power you can steal by defeating them, but the focus is on getting gear, not completing the game. However, the gear you collect will ultimately help you complete the game and unlock plenty of clues you can use along the way.

3. Each Slab ability can be upgraded four times 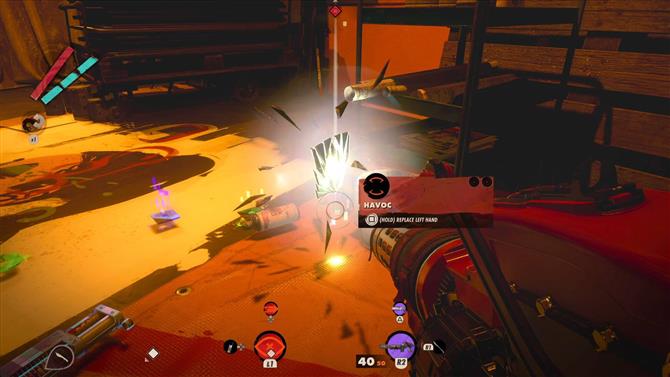 Most of the Visionaries possess a Slab infused with a power you steal by killing them – things like teleportation, telekinesis and so on. The first time you kill a Visionary you’ll get the basic power but each time after that you’ll get a buff. You can do this four times, unlocking a different extra thing that can make a huge difference to using them. The upgrades you can unlock can make powers last longer, reach further or enhance key attributes – for example, Shift, the teleport ability, can unlock things like extra range or the ability to pause in mid-air.

4. Nexus and Aether are your go-to powers 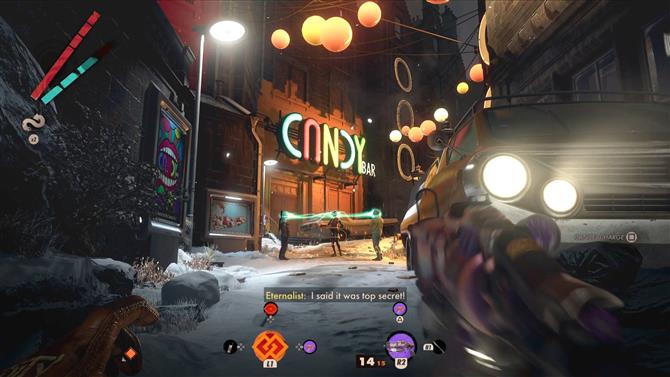 Nearly all the powers you can unlock are great fun, but you can only carry two, and Nexus and Aether will be your main work horses to get you through nearly all the game. Nexus lets you link enemies together so that killing one, kills them all (basically Domino from Dishonored). Use it well and you can clear entire areas with a single shot. It’s also great if you get overwhelmed as, again, it lets you get rid of everyone by killing a single person. Aether, on the other hand, renders you more or less invisible, letting you sneak through areas and avoid triggering turrets, cameras and trip mines. They’re great from the start but upgraded they get better – upgrades for Aether will let you stay invisible forever when you stand still, for example. While Nexus can unlock an upgrade where enemies can ‘infect’ others with their connection. Shift is another useful power when you want to explore, although for the most part you can reach most places with the double jump. Once you know your way around it’s easy to leave Shift behind.

5. Sacrifice anything you don’t need to Infuse gear before looping 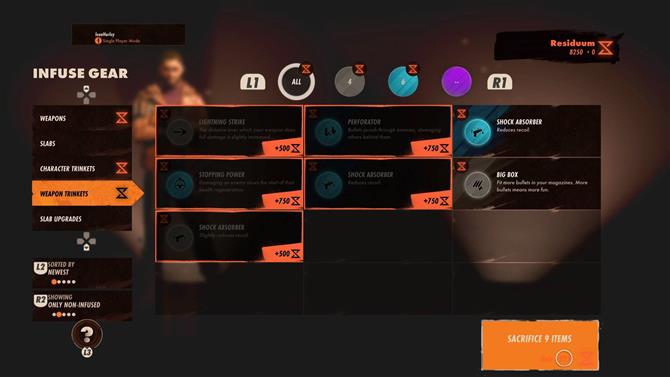 At the end of each day you’ll loop back around to the morning and lose anything you don’t Infuse by using Residium. You can get Residium from sparkling objects you’ll find in the world, and by sacrificing any weapons, Trinkets and Slab upgrades you don’t want. Early in the game it’s worth getting rid of anything you don’t need to make sure you can keep anything useful. At the start, you’ll likely have more gear you want, than the Residium you need to save it.

6. Sort by Effect and All on the Gear screen to see duplicate Trinkets 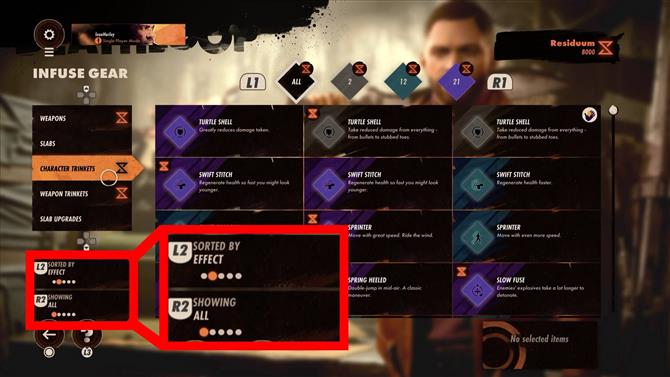 As you progress further, you’ll soon start to get a lot of duplicate gear. On the Infuse Gear screen, where you can also sacrifice stuff to earn more Residium, you can set filters on the left and right triggers. If you set these to ‘Effect’ and ‘All’ it will group all the similar ones together. That will make it easier to see if you already have multiple Trinkets. For Weapon Trinkets you’ll generally want to use the highest level ones you have across your guns. So once you start to get better versions you can afford to sacrifice the lower level options. With Characters Trinkets you can only use one anyway, so always get rid of the lesser incarnations.

7. All the Deathloop levels change with the time of day 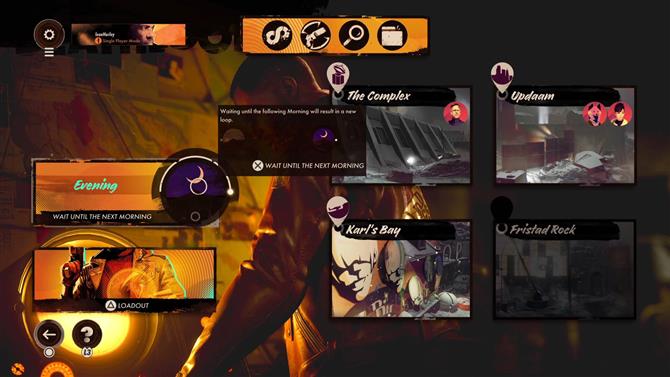 There are four levels in Deathloop – Updaam, the Complex, Fristad Rock and Karl’s bay. There’s also four times of day – morning, noon, afternoon, and evening. Wherever you chose to visit will stay at whatever time you arrive, and the day only advances when you leave and travel elsewhere. While there are obvious differences between times like light or weather, there are less obvious things to look out for. Guard patrols will change for example, but more importantly there will be certain areas you can only reach at certain times – some doors will be open at one time of day, say, or others blocked off. Because of that you might want to make sure you take some time to explore everywhere, every time.

8. Don’t try and do too much in a single loop 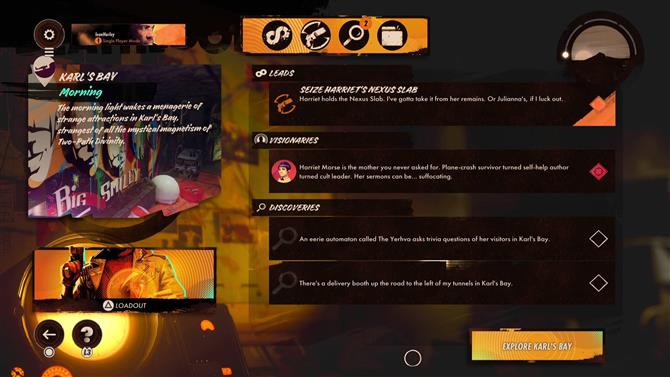 You’ll quickly end up with a huge list of clues and things to look for in a given area. It’s easy to want to try and be efficient and do multiple things at once to save time. Try to resist the urge though for two reasons. First up, you might end up with more gear than you can Infuse, and you don’t want to lose a great gun or power up because you don’t have enough Residium. Secondly, you might lose everything. You basically get two lives in Deathloop, after that if you die you lose everything as the day loops around. The longer you spend in an area, the more gear you might find, but at the same time the more risk there is that you’ll perma-die, loop the day and lose good gear.

9. Dump anything you’ve infused if you need to pick something else up 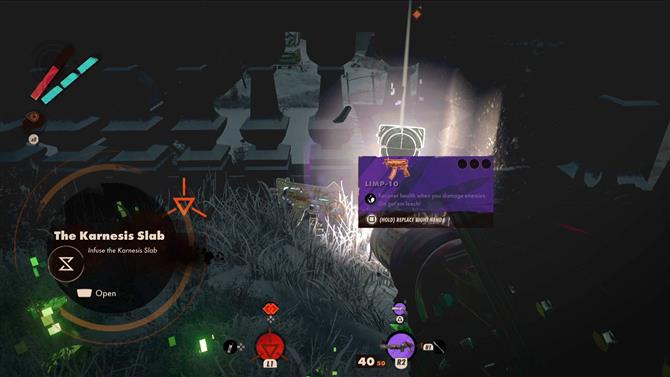 Once you’ve infused a weapon or power you’ve got it forever. That means if you find a really cool gun you can swap the infused one for it – you’ll leave the infused weapon behind for the rest of that day but get it back once you loop. You’ll have to do this anyway when you get Slab powers as you can only carry two, so whenever you get a new Slab you’ll have to drop an existing one to pick it up. As long as you’ve infused something you can never lose it so feel free to grab anything new you find along the way. 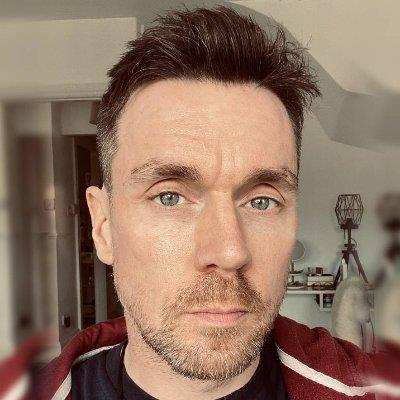 I’m currently GamesRadar’s guides coordinator, which means I’ve had a hand in producing or writing all of the guide and tips content on the site. I also write reviews, previews and features, and do video. Previously I worked for Kotaku, and the Official PlayStation Magazine and website. I’m a big fan of open world games, horror, and narrative adventures. 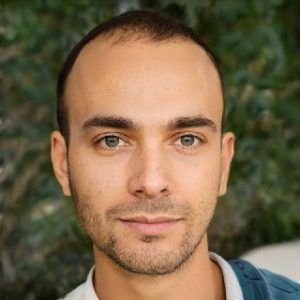